With Nexus, your most frequently used applications are only a mouse click away – and Nexus turns working with your computer into a fun and exciting experience. By using it you can easily place your most frequently used applications, shortcuts and directories on a dock that is easily accessible, but that is just the start. You can also use integrated plugins to route important information from the web into your dock most notably weather information from any destination in the word. 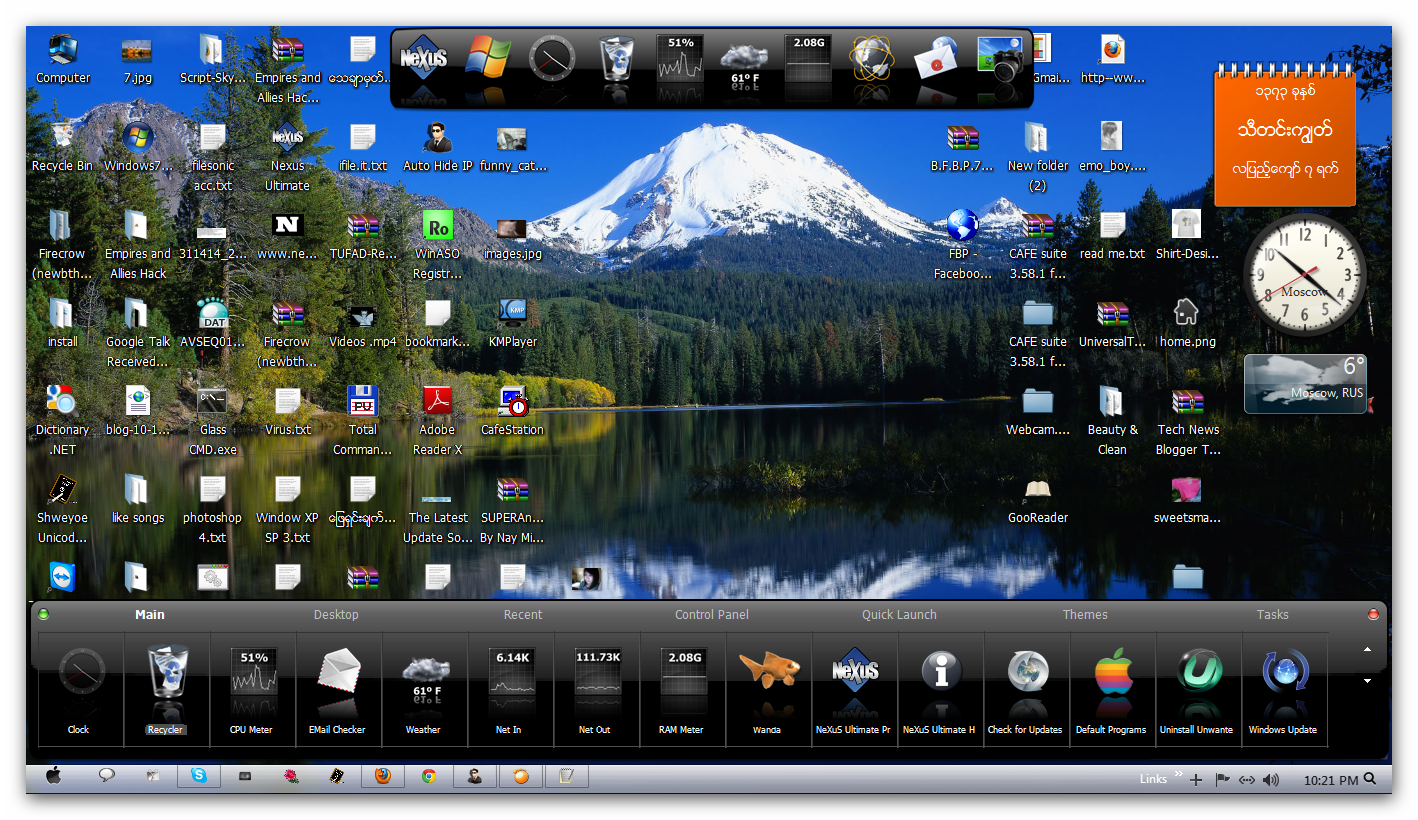 Display running applications on the dock with task grouping, task filtering and icon customization options. Display system tray on the dock as single or grouped icons.

Compatible with skins for all 3rd party docks. Multiple docks. Ability to group shortcuts into an unlimited number of nested sub-docks.

Instant access to the contents of Folders, Downloads, and more via Grid Stacks. Categorize applications into user-defined tabs on Shelves tabbed docks. Increase productivity by displaying folders, the Desktop, My Computer, Control Panel and other virtual system folders on Shelves. Reduce clutter by hiding desktop icons and using a Shelf’s Desktop tab instead. One click theme switching via the special Themes tab on a Shelf.

A Shelf makes it possible to have a ‘clean’, uncluttered, desktop with no icons on it whatsoever by having Nexus Ultimate hide the icons on the Desktop – icons that can then be quickly accessed via the Desktop tab. Tabs in a Shelf can also have keyboard shortcuts associated to them to make the Shelf simultaneously come to the foreground and open that particular tab.

You can create as many Shelves as you want with the built-in Dock and Shelves Manager, dock them to the screen edge of any monitor, or even leave them floating on your desktop. You can even add sub-docks and Grid Stacks to Shelves: Grid Stacks Nexus Ultimate Stacks are a particulary useful new feature that can give you instant access to the contents of Applications, Documents, Downloads, and any other folders placed into a dock, shelf or drawer.

Search Filter Nexus Ultimate Shelves, Drawers and Grid Stacks are able to display folders containing thousands of files – so sometimes finding what you want is the problem. All you need to do is start typing, and contents are automatically filtered according to what you just typed. You can press Backspace to delete a character or ESC to clear and dismiss the search filter. Live Icon Reflections The first and only Windows dock to feature live icon reflections.

Reflections update in real time if the icons animate or change. Size and transparency of reflections are also user configurable. Drop documents onto dock application objects and have them automatically loaded. PNG or. TIF file onto the chosen object. Special Effects Eye Candy is king! Lots of optional special effects such as icons zooming, bouncing, glowing, rocking, swinging, squishing, spinning, exploding, etc, shifting to make room for items about to be dropped, bouncing on application launch, visual feedback for specific actions, incredible ‘fluid’ effects that make docks and icons behave like liquid surfaces, sound events for when docks collapse and pop up or sub-docks open, and lots more!

Additional Visual Effects Nexus Ultimate With Nexus Ultimate you get even more amazing mouse-over, launch, attention and delete effects on top of the wide selection already given to you by the free version of the Winstep Nexus dock!

Document Thumbnails Documents, pictures and video files dragged to a dock show up as thumbnails for easy identification.

Blur Behind Automatically blurs the background of semi-transparent docks Vista and Windows 7 only. Reserve Screen Space Makes sure maximized windows do not overlap docks attached to screen edges.

Respect Reserved Screen Space Prevents docked docks from overlaping the Windows taskbar and other screen edge-attached toolbars. Built in support for animated icons Nexus features built-in support for animated icons. With no need to install 3rd party docklets and full drag and drop support, animated icons in Winstep applications are as easy to use as any other icons: Running Applications Nexus is a complete taskbar replacement with the ability to display running applications on the dock – with Windows “Superbar” abilities, including Aeropeek, even on Windows XP.

System Tray Nexus can display the system tray on the dock in one of two modes: Tray icons can be displayed one-by-one or in grouped mode to take up as little space as possible. Tray Icon Customization Nexus Ultimate System tray icons are originally small 16×16 icons, and can look very blurry when displayed on the dock at larger sizes. Nexus Ultimate allows you to customize tray icons with high-resolution alternatives to solve this problem, with a set of high-resolution images for system tray icons being included in the application.

Auto-Hide Docks attached to screen edges can auto-hide onto the screen edge and pop up on demand. Auto-Collapse Floating docks i. Click here for a full list of Winstep’s internal commands and what they do.

Clock Alarms and Task Scheduler Clock module associated alarms allow you to display pop-up reminders, wake you up with music or run programs at specific times, once or periodically.

The free version of Nexus supports a single alarm, while Nexus Ultimate supports an unlimited number of alarms. Keyboard Navigation Docks can be brought to the foreground and dock items launched through user-specified hotkeys. Full keyboard support makes Nexus the ideal dock for Home Theater users: Nexus is the first – and only – Windows dock that can be fully controled with nothing but the keyboard and remote controllers such as the Logitech Harmony. Complete Customization Virtually every aspect of every dock is customizable: Quality And Performance Tested Nexus has undergone extensive testing by thousands of dedicated users.

This testing continues as part of our ongoing efforts to provide top quality software to our customers.

The Winstep Nexus Dock is a free professional dock for Windows.

Pros Tons of customization: Winstep Nexus Dock give you a lot of options and a fine degree of control over how the dock looks, moves, and sounds. You could have the dock running on a hundred different PCs, with no two docks feeling exactly alike.